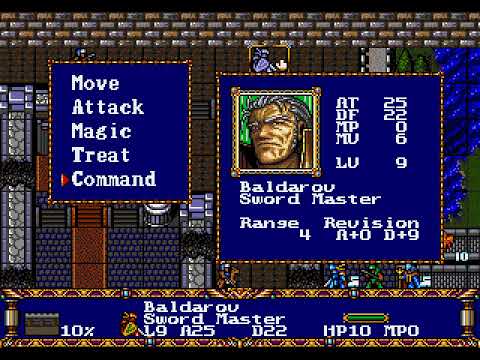 The storyline follows the armies of Prince Garett of Baltia as they battle the Dalsis Empire and the monsters they unwittingly awaken, framed as a battle between the forces of good and an ancient evil that threatens to overrun the world.

Warsong, known as Langrisser in Japan, is a tactical role-playing game developed by Nippon Computer Systems (NCS). The music was composed by Noriyuki Iwadare and Isao Mizoguchi. The character designs were made by the ecchi artist Satoshi Urushihara. The first in the Langrisser series, it blended tactical warfare with RPG elements, similar to the Fire Emblem series. It was initially released for the Mega Drive/Genesis console and the PC Engine (in Super CD-ROM2 format), the former version being published by Treco in America and the only game in the franchise released outside Japan.

The player controls a group of heroes or commanders to accomplish some goals each phase. They are joined with non-controlled allies to battle with enemies’ commanders. Before each phase, the players can purchase up to eight units of a single type for every one of their heroes. The type of the available units depends on the hero class. At the end of each phase, any survivor army provides some amount of cash for the player to use next time. After each battle, the winning commander gains experience that allows him to upgrade to a more powerful class. If a player-controlled hero dies, they are lost forever.

The English localization by Treco uses different character portraits from the Japanese original. It also renames some characters, items and locations, so they don’t make any sense in continuity of the series. Most notably, the eponymous sword is renamed into Warsong instead of Langrisser (Germ. “Lung Ripper” ).