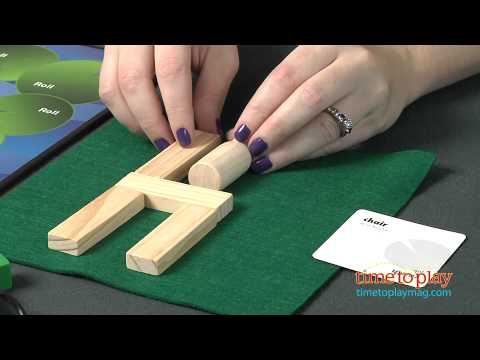 See the full review at

In Morphology Junior, players must use wooden sticks, glass beads, colored cubes, string, and more to create pictures that represent words, such as “butterfly” or “airplane.” The player who is creating the picture is called a Morphologist and his teammates must guess the word by looking at his picture. If the team guesses correctly, they get to move their frog piece to the next lilypad. If the team doesn’t guess correctly before time runs out, they don’t advance. The team to reach the final lilypad first wins.

There are easy words and hard words. You can choose to use both word levels when you play or only use one level. Then teams take turns choosing one player to be the Morphologist and guessing the word based on their Morphologists’ picture in 60 seconds. The Morphologist chooses a card, looks at the word, reads aloud the hint, and starts building. Morphologists can animate the pieces, which comes in handy for action words such as “climb,” but there are some things that Morphologists cannot do, such as using the pieces to spell out the actual word. Be sure to carefully read the instructions before you play.

The second-to-last lilypad says “Pick 5+1.” This means that the opposing team(s) selects five pieces for the building team’s Morphologist to use. They make their selection without viewing the word. Then the Morphologist looks at the word and selects one additional piece to use.

Morphology Junior comes with 480 word cards, 35 large building pieces, a 60-second timer, four team frogs, a die, a game board, and rules. The game is for four teams.