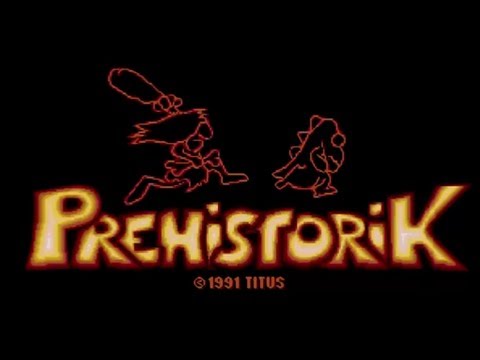 Facebook Fanpage :
——-
Prehistorik is a 2D platform game, released in 1991 by Titus for the DOS and other computers at the time. You take control of a caveman who goes from level to level beating up a bunch of prehistorik creatures with his club and collecting various food items. There’s a bar at the top of the screen indicating how much food you’ve collected – you can’t advance to the next level until you fill up this bar. The creatures you defeat add up to your food bar as well: pound them on the head with the club a couple of times to knock them out, then walk over them to add them to the food meter. Be careful though, because if you leave them lying on the ground for too long after knocking them out, they’ll get back up and come after you again. There are 4 levels and in between each level there is a boss battle, for a total of 7 levels. Yes, 7 whole levels IF you count the boss battles which are really just one screen, so technically there are only 4 ! You know this can only come down to one problem: the difficulty ! It’s one of the most unforgiving games I’ve ever played on the DOS, and this is due to the mechanics of the game. First of all attacking is a joke: you press the space bar to swing your bat, but the bat barely stays out a second ! It just pops out and then disappears, leaving you defenseless ! You can’t hold down the space bar and swing the bat continuously either – you have to tap it like crazy ! Because of this, when attacking, your timing has to be 100% accurate and make sure the enemy is as close to you as possible, because the range of the bat also sucks. It’s almost impossible to hit something without taking some damage yourself. You just have to spam the space bar and hope for the best. You can upgrade the bat to a hammer if you find it in a cave, or if one of the floating indians drops it (if you’re fast enough to walk up to him and hit him with the bat). The hammer knocks out enemies in one hit, but when you die just once, you lose it and go back to the bat. You lose the hammer upon finishing the level anyway, so it’s only useful for a short time. The second flaw is the jumping: you jump with the UP arrow key (which is pretty shitty to begin with) but the caveman barely gets off the ground – you get no hangtime whatsoever ! This makes it almost impossible to jump over spikes or flames without touching them – you either take damage because you jump too early and land on them, or because you touch them while trying to get as close as possible to make the jump ! You can get a spring that makes you jump higher (how you should have jumped in the first place), but just like the hammer, when you die or finish the level, it goes away. So yeah the difficulty is cheap, but what tops it all off is that there are no continues ! Once you lose all your lives, it’s back to level 1 no matter how far you’ve made it. There’s no password system either, not even a cheat code – NOTHING ! The only way of seeing anywhere past level 2 is to practice a lot and waste no lives in the earlier stages, so you’ll have enough to keep going in the later ones ! There are many ways to die too: the most common is getting hit too many times (which happens a lot due to the stiff controls). There’s no way to refill your energy bar once you get hit. There ARE extra lives in the form of ankh crosses, but they’re very rare out in the open and the indian doesn’t drop them too often either. Another way of dying is through instant-death hazards: falling in a pit or in water, touching an enemy boss, or touching spiky rocks. Finally there’s the time limit. Imagine this: the game is hard enough as it is, now you also have to beat the levels within a time limit.To be fair, you get plenty of time and it doesn’t go down all that fast, so if you have any common sense, you’ll never run out of time. It took me 13 years, but I finally beat this game – yes that’s right, I’ve never once beaten it till now, since I’ve had my first DOS machine ! So there you have Prehistorik: it looks like a decent platformer for the DOS (the music is lively and silly, the graphics are nice…) but it’s a frustrating experience overall and you’ll shortly feel the need for a better game. Try it only if you are a DOS god, or if you have nerves of steel – you’ll need them !